On April 8, 2016, the remains of San Francisco native Corporal Robert Perry Graham, U.S. Army, were laid to rest with full military honors at Holy Cross Cemetery in Colma, California. In 1950, then-PFC Graham was sent to Korea as a member of Company A, 13th Engineer Combat Battalion. 7th Infantry Division. In early February, 1951, Graham’s unit came under attack; and on February 13, he was declared Missing in Action. Right after the Armistice in 1953, it was learned that Graham had died while a POW, some time around May 31, 1951. He was posthumously promoted to Corporal. 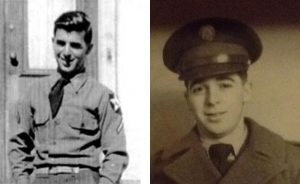 Decades after Cpl Graham’s death, the North Korean Government turned over boxes containing the recovered remains of U.S. servicemen who died during the war to the U.S. Government. Later analysis matched the DNA in some of the remains with DNA from Graham’s nieces and nephews. His brothers and sisters always believed that he would be found some day. They have since passed away, except for one sister and many nieces and nephews. Cpl Graham was only 21 when he died. Welcome home, Robert Perry Graham. May you now rest in peace.