Korean War Hero and Medal of Honor Recipient Dies at 85

Einar H. Ingman, who was awarded the Medal of Honor for destroying two machine gun nests in Korea in 1951 despite suffering grievous injuries, died on Sept. 9 in Tomahawk, Wis. He was 85. The Medal of Honor News website confirmed his death but did not specify a cause. 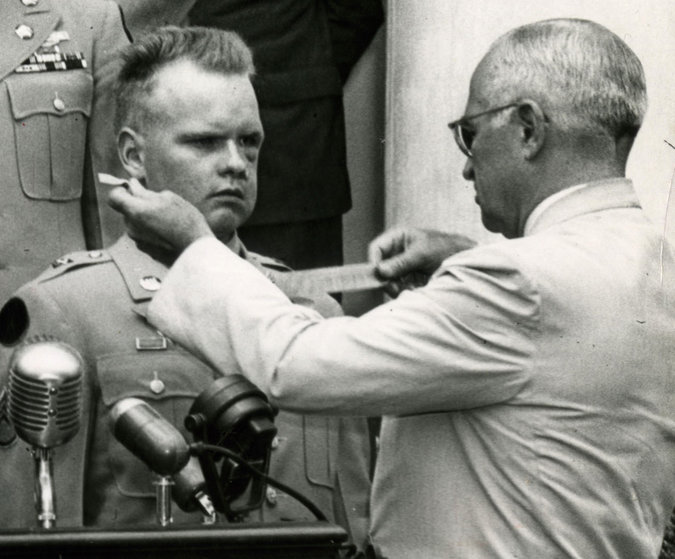 Einar Ingman, U.S. Army, receives the Medal of Honor from President Harry Truman at a White House ceremony in 1951

On Feb. 26, 1951, Corporal Ingman’s Army company attacked a ridge fortified by Chinese soldiers outside of Maltari, South Korea. When two squad leaders were wounded, Corporal Ingman assumed command. He hurled a grenade at a machine gun position and charged it alone, killing the remaining crew with his rifle. As his soldiers advanced, another machine gun pinned them down. Corporal Ingman raced toward the second position but was knocked down and hit in the face and neck by bullets and grenade shrapnel that tore off most of his left ear. Blinded in his left eye, he rose and killed the entire gun crew with his rifle and bayonet before collapsing, unconscious. As a result of his actions, his Medal of Honor citation said, “more than 100 hostile troops abandoned their weapons and fled.” Corporal Ingman (he was later promoted to staff sergeant) lost his left eye, became deaf in his left ear and suffered a severe brain injury. Over two years he endured more than 20 operations. President Harry S. Truman bestowed the medal on him and other servicemen at a White House ceremony.

Einar Harold Ingman Jr. was born on Oct. 6, 1929, in Milwaukee. After the war he worked at a paper company in Tomahawk, in northern Wisconsin. His wife, Mardelle, died in 2011. He is survived by three daughters, Karen Watzlawick, Mary Ingman and Judy Mews; four sons, Einar III, Tom, Jerry and Jimmy; a sister, Janet Panzer; two brothers, Ted and Larry; eight grandchildren; and six great-grandchildren.