THEN: In the grim days of August, 1950, the North Koreans had pummeled and driven the U.N. Forces into a cul-de-sac in the southeast corner of the Korean Peninsula, an area that became known as the Pusan Perimeter. U.N. Commander General Douglas MacArthur knew that a bold stroke was needed to break the North Korean stranglehold. And he came up with just the right bold stroke. On September 15, 1950, General MacArthur ordered the 1st Marine Division to spearhead the Inchon Landing, a crucial and high-risk amphibious assault that succeeded, and changed the course of the Korean War.

The 5th Marine Regiment that assaulted the Red Beach sector of the objective included Able Company, commanded by then-Captain and now KWMF Secretary John R. Stevens. These troops had to use hastily-made wooden ladders to climb out of their landing craft and scale a high stone seawall in the face of enemy fire.

The photo below shows Able Company’s Lieutenant Baldomero Lopez at the top of a ladder, just minutes before he gave his life to save his fellow Marines while assaulting an enemy bunker. He received the Medal of Honor posthumously for his valorous actions that day. 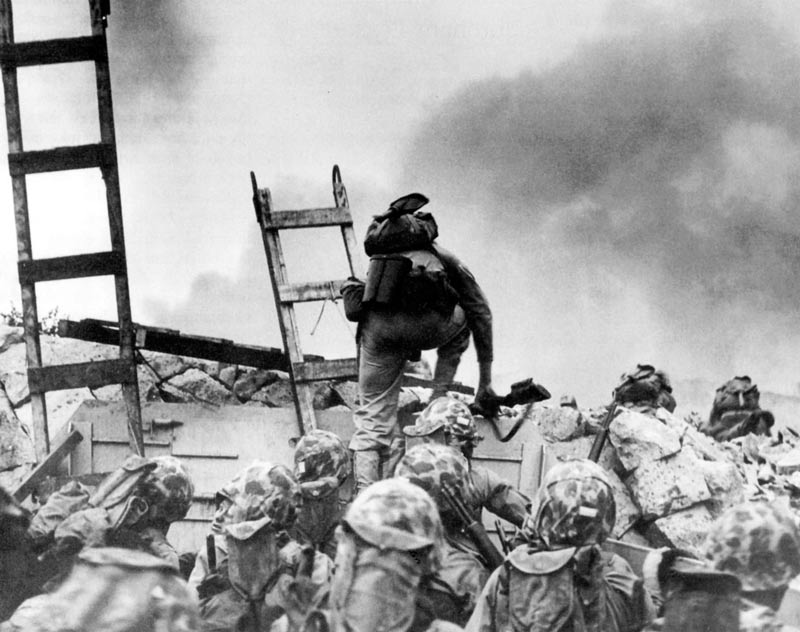 By September 16, the Marines had captured the city of Inchon. Soon after that, Seoul was liberated, the U.N. Forces had broken out of the Pusan Perimeter, and the North Koreans had begun their long retreat northward, all the way to the Yalu River on the Manchurian border.

NOW: On September 15, 2014, exactly sixty-four years after that pivotal Inchon Landing, two very heavy boxes arrived from Korea at the KWMF office. Each box contained one of the actual stones from that legendary seawall.

Actual stone from the Inchon seawall 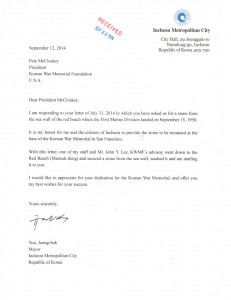 KWMF owes a debt of gratitude to three people for this historically significant gift:

The iconic Inchon Landing image will – subject to the approval of the Presidio Trust and the public – be part of the design of the Korean War Memorial. It is KWMF’s hope that approval will also be granted to incorporate the actual Inchon stones and explanatory text into the Memorial design as well.