In 1949, our nation was at peace and KWMF Education Director Wallace T. “Wally” Stewart was a 16-year-old student at San Francisco’s Abraham Lincoln High School. In an act of youthful bravado, Wally stretched the truth a bit about his age and joined the Marine Corps Reserve. His buddy and fellow Lincoln High student Richard A. “Dick” Pearce, also 16, signed up with him. The two boys were soon to learn the unintended consequences of their decision. Within months, the Korean War broke out, they were called up to active duty in the 1st Marine Division, and before they knew it, they were in combat in Korea. Wally came home. Dick didn’t.

On October 7 of this year, at the invitation of Lincoln High’s JROTC Commander George Ishikata, Colonel, U.S. Army (Ret.), Wally, a retired teacher in the San Francisco Unified School District, returned to his alma mater to instruct several classes of JROTC students about the Korean War—and about unintended consequences. This wasn’t a dry history lesson of a long-ago, faraway war, but a first-person narrative by one of Lincoln High’s own alumni. This was living history. 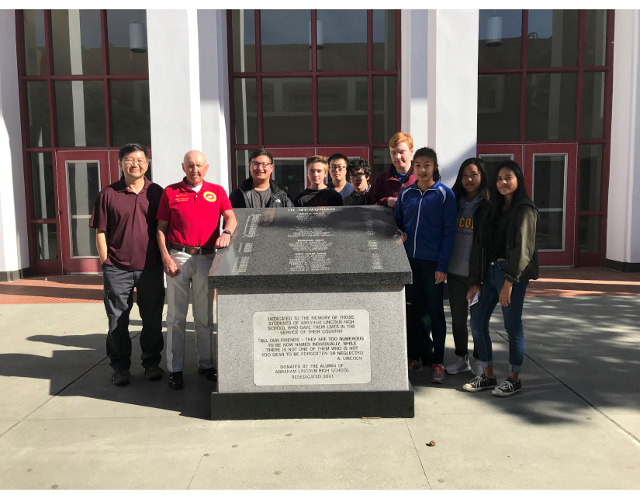 Wally was accompanied on his visit by fellow classmate and fellow Korean War veteran Richard Friedman, who fought with the U.S. Army’s 2nd Infantry Division during the conflict. 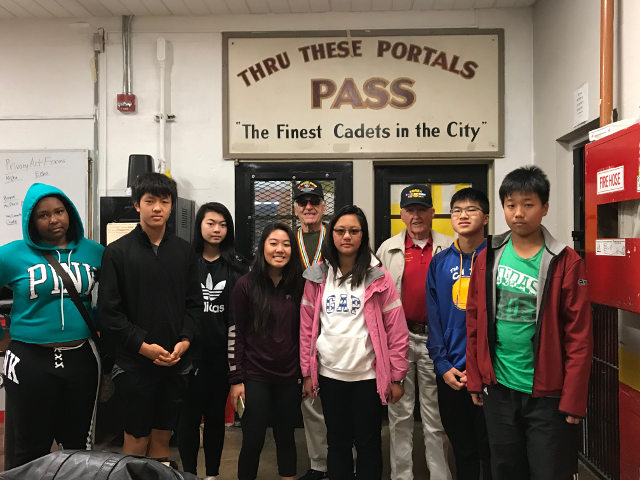 Wally made presentations to several groups of the JROTC students. He interwove his personal experiences with a description of the geopolitical tensions of that era that led to the war; and he pointed out that these same dangerous tensions, unfortunately, are still with us today. As Shakespeare wrote in The Tempest, “What’s past is prologue.” 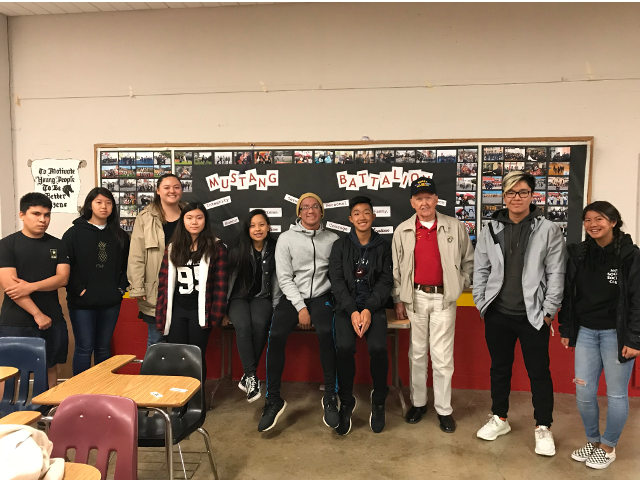 Wally Stewart with one of the student groups

While Wally was teaching, Richard had an opportunity to visit the school’s Sports Hall of Fame and recall his high school “Glory Days.” The multicolored ribbon and medal around Richard’s neck in the photo below is the Ambassador for Peace medal, an award bestowed upon him, Wally, and thousands of other Korean War veterans by the grateful Government of the Republic of Korea. 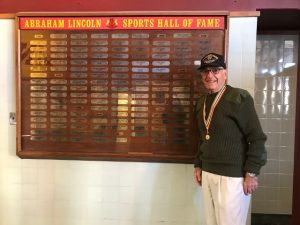 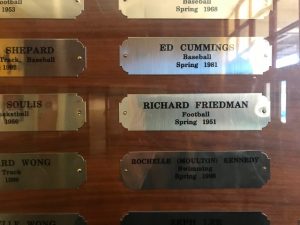 After the classroom sessions, the students joined Wally and Richard at the War Memorial outside the school’ entrance. This memorial honors and remembers those from Lincoln High who died in World War II, the Korean War, and the Vietnam War. 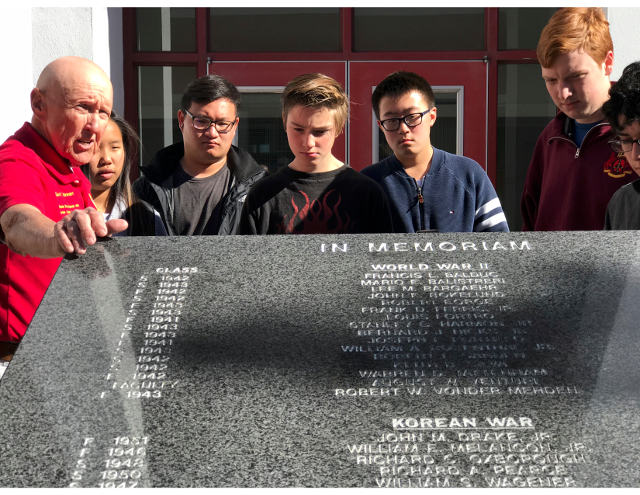 Engraved on the memorial surface, under “KOREAN WAR,” note the second name from the bottom: Richard A. Pearce. That’s Wally’s teenage buddy Dick Pearce, who was killed in Korea. Unintended consequences. May he rest in peace.

This presentation at Abraham Lincoln High School is just one element of KWMF’s ongoing Korean War Education Program. The program began at Lowell High School, where Wally once taught, and will soon spread through other secondary schools in San Francisco and beyond. The program is designed to inform future generations of the causes on the Korean War; the sacrifices made in defense of freedom by the United States, South Korea, and our United Nations allies; the war’s outcome; and the lessons learned.

You can support KWMF’s Korean War Education Program by making a donation via the KWMF Donor Page, or by mailing your donation, payable to KWMF, to:

The Korean War Memorial Foundation is 501(c)(3) non-profit organization, Federal Tax ID #27-2773272. Your donation is tax deductible to the full extent allowed by law. Thank you for your support.

Newer New Rep. of Korea Consul General in SF: The Honorable Park Joon-yong
Back to list
Older A Memorable Meeting of Past and Present
close