Work has now begun in earnest on the Korean War Memorial site. Spearheading the effort is primary contractor Plant Construction Company of San Francisco, under the supervision of the Presidio Trust. The site has been built up and graded, and much of the initial preparation work has now taken place, including the excavation of a long, curving trench. This trench will hold the foundation upon which the Memorial wall will stand. 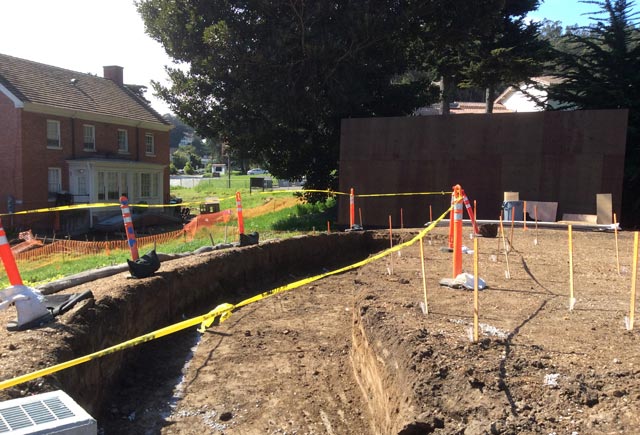 March 25: The newly-dug trench for the Memorial wall’s foundation 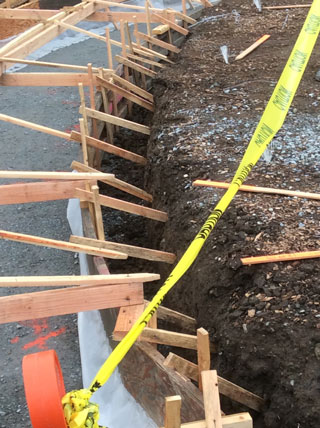 April 11: The trench partially filled with crushed rock, in preparation for the pouring of concrete for the wall.

Plant Construction’s Superintendent Marty Shoemaker has been on-site nearly every day since the job began, supervising all aspects of the work. And he’ll be there right up to completion of the project in early July. “We’re making good progress,” Marty said, “and I don’t anticipate any delays as long as everything gets here on time.” Coincidentally, Marty’s late half-brother Bill Shoemaker was a platoon sergeant in the 5th Marines during the Korea War, and wounded at the Chosin (Jangjin) Reservoir in November, 1950. Bill made the Marine Corps a career, served in Vietnam, and retired as a sergeant major. He is now interred at Arlington National Cemetery. 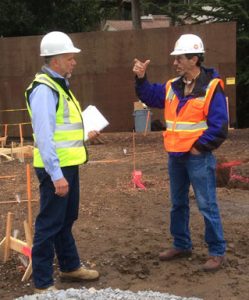 Early on the morning of April 11, Marty was joined on-site by Michael Lamb, the Presidio Trust’s Historic Landscape Architect. Michael commented, “We’re fortunate to be working with a group of excellent contractors and craftsmen. Their attention to detail will result in a wonderful and lasting memorial.” For over two years now, Michael and his Presidio Trust colleagues Genevieve Bantle and Paul Scardina have been coordinating closely with KWMF, developing the stunning design that will soon move from concepts on paper and computer screen to reality. 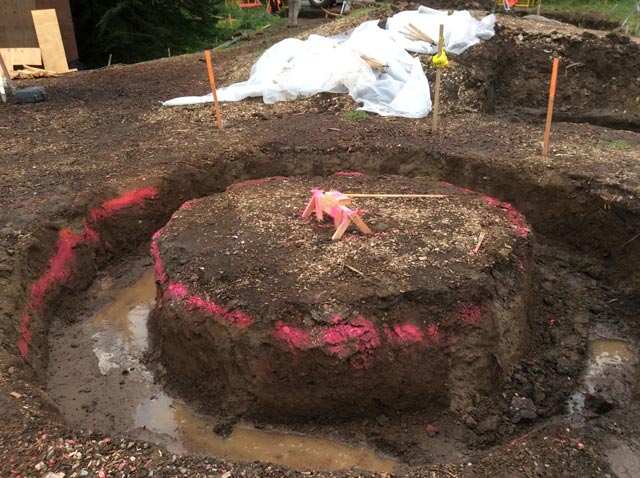 A stately tree will be planted here, in the center of the Memorial Plaza, with stones from major Korean War battlefields embedded around its base. The area will then be bordered by a circular bench. 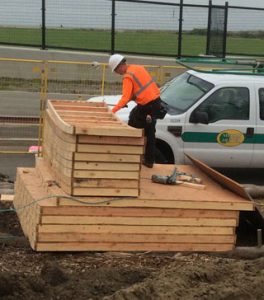 These wooden panels will form the structure into which concrete will be poured for the Memorial wall. While construction proceeds here in San Francisco, back in Minnesota, huge panels of polished black granite etched with iconic images from the Korean War are now being fabricated at Coldspring, the granite panel supplier. In a few weeks the panels will be shipped to the site and mounted on the Memorial wall.

These are not the actual wall panels, but “trial runs” to evaluate the quality of the photographic images on the black granite.

Work on the main Memorial wall, as well as the entrance walls, interpretive panels with historical images and information, donor recognition plaques and tiles, landscaping, lighting, bench seating, and other features will soon begin. By mid-summer, after six years of effort by scores of dedicated people and the generosity of hundreds of donors providing $3.5 million in donations, the Korean War Memorial will be open to the public. It will be a most worthy addition to the Presidio, and a potent reminder that the so-called “Forgotten War” is not forgotten.