On February 19, the Presidio Trust Board of Directors voted their approval of the design and location of the Korean War Memorial. This is a major milestone in our long journey to get this Memorial built. The design must still meet final environmental and historic preservation compliance requirements, but this Board approval now opens the door for the completion of design drawings and the beginning of construction work some time this year.

The Korean War Memorial will stand in a prominent place at the corner of Lincoln Boulevard and Sheridan Avenue, adjacent to the National Cemetery.  It will face west toward the Golden Gate Bridge, the Pacific Ocean, and the now democratic and prosperous Republic of Korea. The site will consist of a paved plaza bound by a curving granite wall onto which iconic images of the war and informative text will be inscribed. The peaceful garden setting will allow for remembrance and reflection. 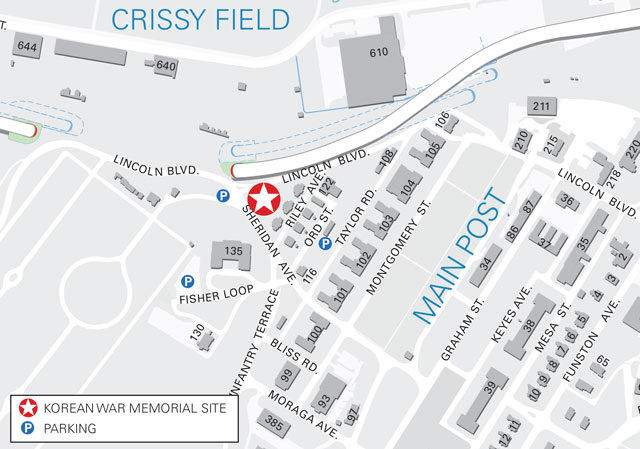 This approval by the Presidio Trust Board of Directors now makes possible the signing of a formal Agreement between the Presidio Trust and the Korean War Memorial Foundation, the selection of designers and contractors, and the construction of the Memorial. KWMF, in cooperation with the Government of the Republic of Korea and the Presidio Trust, is now planning a formal Groundbreaking Ceremony to take place on the Memorial site some time this spring. The exact date will be announced soon.