On Wednesday, March 23, a ceremony was held at the Diocese of Oakland Chancery Offices. On behalf of the Government of the Republic of Korea, Deputy Consul General Jung Yoon-ho presented the Most Reverend Michael C. Barber, SJ, Bishop of Oakland, with the Ambassador for Peace Medal. The Republic of Korea presents this medal to U.S. veterans of the Korean War or their survivors to express gratitude for the veterans’ service. In this case, it was in recognition of the service of Bishop Barber’s late father, Adlai Charles Barber, who served in the U.S. Army in the Korean War from 1950-52 and passed away in 1985 at the age of 56. 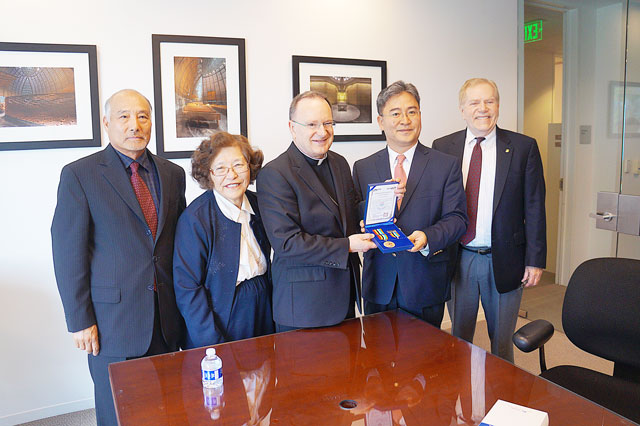 Also present were Harry Nang and Joanna Kim-Selby, respectively Chairman of the Board and President of the East Bay Korean-American Senior Service Center in Oakland, who helped organize the ceremony; and Gerard Parker, Executive Director of the Korean War Memorial Foundation.

The Most Reverend Michael C. Barber, SJ, Bishop of Oakland,
with Ambassador for Peace Medal

Bishop Barber was ordained to the episcopate and installed as the fifth Bishop of the Archdiocese of Oakland on May 25, 2013 in the Cathedral of Christ the Light. Earlier in his life, after attending Saint Pius X Prep School in Galt, California, he entered the Jesuit novitiate in 1973 and was ordained a priest in 1985. He studied at Loyola Marymount University and in 1978 received his BA in Philosophy and History at Gonzaga University in Spokane, Washington. He subsequently studied at Regis College at the University of Toronto and the Pontifical Gregorian University in Rome.

Bishop Barber has held positions as a missionary in Western Samoa and as tutor and chaplain at Oxford University in England. Since 1991 he has served as a chaplain in the U.S. Naval Reserve, achieving the rank of Captain. Barber, a Jesuit, was the first American bishop appointed by Pope Francis, who is the first Jesuit pope.