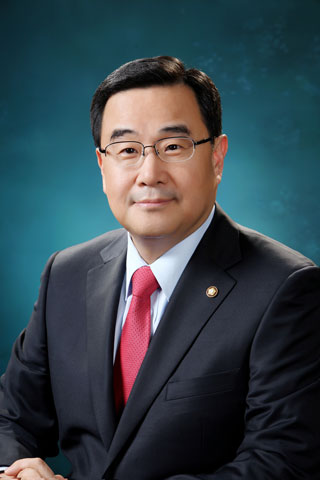 Representative Kim Jung-hoon is a three-term member of the Republic of Korea’s National Assembly. He was first elected in 2004 to represent Nam-gu District in Busan, and reelected in the general elections of 2008 and 2012. He also served a term as Chairman of the National Policy Committee of the 19th National Assembly, a term that ended in June, 2014. This key standing committee oversees the Prime Minister’s Office, the Ministry of Patriots and Veterans’ Affairs, the Finance Supervisory Commission, and the Fair Trade Commission.

In 2009, Representative Kim attended the 64th General Assembly of the United Nations, where he made a persuasive appeal to UN Secretary-General Ban Ki-moon about the historical and moral importance of the UN Memorial Cemetery, located in his home district of Nam-gu. The following year, his appeal resulted in the UN designation of Nam-gu as a Special Peace and Culture Zone of the United Nations, the only such zone in the world. 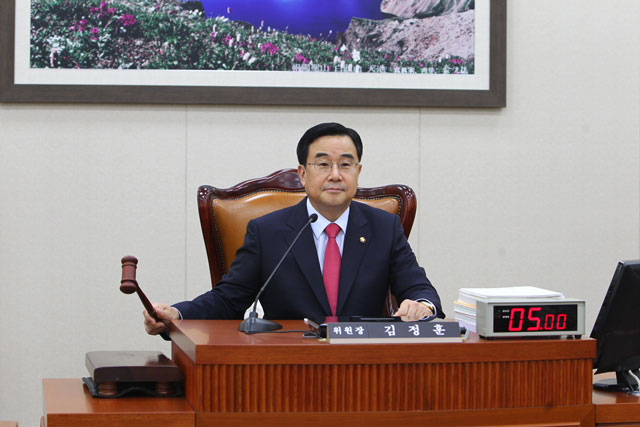 Re. Kim chairing a National Policy Committee meeting in 2013

In July, 2013, serving as President Park Geun-hye’s special envoy, Representative Kim attended the commemorative ceremony for the 60th Anniversary of the Korean War Armistice in Washington, DC, where he met with President Barack Obama and Secretary of Defense Chuck Hagel.

Representative Kim reinforced his commitment to U.S. veterans of the Korean War in January, 2014, when he founded the American Veterans of Korea Foundation (AVKF), which he currently chairs. AVKF’s mission is to support American Korean War veterans and their families and descendants. Under his leadership, AVKF has embarked on a number of projects, among them the establishment of an annual scholarship program for veterans’ descendants; close involvement in the creation of a Chosin Few Memorial on the Marine Corps Base in Quantico, Virginia; and a Korean War Veterans’ Benefit Concert which will take place at Carnegie Hall in New York on June 25, 2015, the 65th Anniversary of the beginning of the Korean War.

Representative Kim graduated from Hanyang University with an LL.B. degree in 1987, and received an Honorary Doctorate in Political Science from Pukyong National University in 2013. He currently serves as a senior member of the ruling Saenuri (New Frontier) Party.