If you’re a Korean War veteran and aren’t familiar with the “Revisit Korea” program, you could be missing the opportunity of a lifetime. The following story and photos, courtesy of Fred C. Lash, retired Marine Corps officer and Director of Communications for the Korean War Veterans Association, will tell you all about this opportunity.

In 1975, on the 25th anniversary of the outbreak of the Korean War, the Republic of Korea (ROK) government began the “Revisit Korea” program as a means to say thank you to all UN veterans of the Korean War and their family members. Each year since then, the ROK government appropriates a given amount of money for this special program, and the Ministry of Patriots and Veterans Affairs (MPVA) in Seoul administers it. Korean War veterans selected for the “Revisit Korea” program are required to make their own airline reservations (assisted by the staff of Military Historical Tours: see below for contact details) and pay the airfares. Following the completion of the trip, veterans are reimbursed for 50% of the airfare. Any companion making the trip with the veteran is reimbursed for 30% of the airfare. The remainder of the trip is fully covered by the ROK Ministry of Patriots and Veterans Affairs (MPVA) including transportation within Korea, lodging, and all meals.

Working closely with Korean tourism groups, the MPVA shows America’s war veterans (and veterans of other allied nations who participated in the Korean War), the end result of the bloody conflict that took place in Korea between 1950 and 1953. South Korea’s rapid emergence from the ashes of the 1950s and its economic, social, and diplomatic development have been a great source of pride for foreign war veterans, who fought for the South under the United Nations banner. “This program is intended to express our gratitude to the war veterans. We also hope that the veterans would feel that their sacrifices were not in vain after looking at South Korea’s development,” stated the Honorable Sung Choon Park, Minister of Patriots and Veterans Affairs.

Once they arrive, veterans visit a series of war-related venues, including the War Memorial of Korea; major military bases; the Joint Security Area in the Demilitarized Zone (Panmunjom); and an observation post near the inter-Korean border, not far from the “Bridge of No Return.” 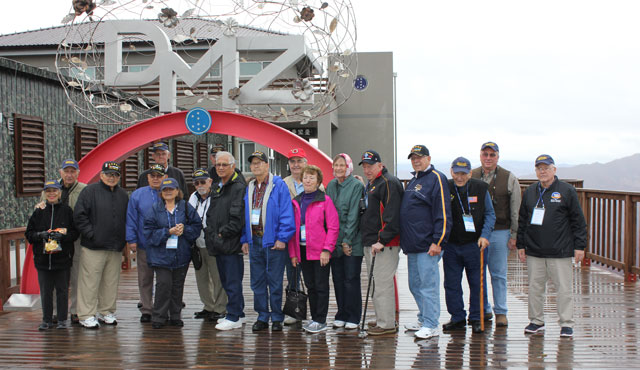 Tour participants at an observation post neat the DMZ, November, 2015

NOTE: The eligibility criteria for the “Revisit Korea” program now include those who are categorized as “Korea Defense Service” veterans who have served in Korea from 1953 to the present time. Those individuals are also now eligible to join the Korean War Veterans Association (KWVA, www.kwva.org). According to the ROK Ministry of Patriots and Veterans Affairs, those who served during the war (1950-1953) still have priority when registering for the program; however, several Defense Service veterans have made the trip and are helping to bridge the gap between the war veterans’ experiences from 1950 to 1953, and current international issues and foreign policy matters currently involving the Republic of Korea.

These “Revisit Korea” tours are very popular, and fill up quickly. If you would like to participate in one of the upcoming tours, please contact Military Historic Tours, www.miltours.com, 703 590 1295.