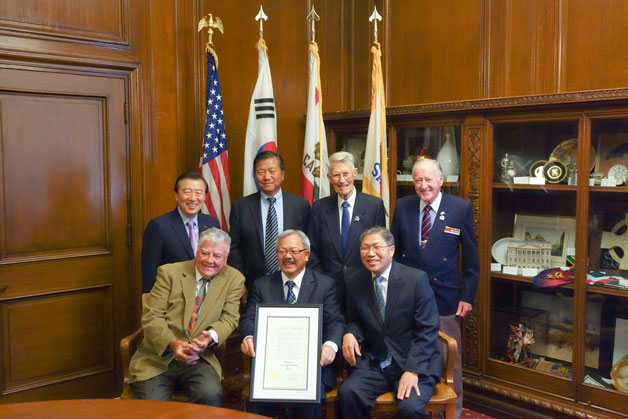 KWMF is in the process of raising $3.5 million to build a Memorial to the Korean War in the Presidio of San Francisco. To date the group has raised just under $1.9 million, with an additional $1 million grant from the Republic of Korea now pending final approval. Full details on KWMF’s progress to date and plans may be found at http://kwmf.org.

The Proclamation is the City of San Francisco’s way of honoring the sacrifices made by all who fought for a democratic and prosperous Republic of Korea, and the close ties between the two nations. As Mayor Lee put it:

“Let this Memorial stand as a testament not just to war but to the friendship between the United States and the Republic of Korea, who together have built a partnership that provides us with significant opportunities for cultural, educational and economic collaborations.”

The Korean War Memorial Foundation is a 501(c)3 non-profit organization, EIN 27-2773272. Donations to the Foundation are tax deductible to the fullest extent of the law.

Newer The ROK’s White Horse Mountain Battle Association Lends Its Support to KWMF
Back to list
Older “Why Korean War won’t be forgotten in S.F.”
close