KWMF recently received donations totaling $20,900 from a group known as Borderless Moonpas. The Moonpas are an informal affiliation of Koreans who share an affection for Republic of Korea President Moon Jae-in. It is estimated that there are millions of Moonpas both in the Republic of Korea and around the world, although the precise number is unknown even to the Moonpas themselves. Most of them have never even met each other, and they have no formal leadership structure. They come together and communicate primarily via Facebook, Twitter, and other social media and online communities. They recently launched their own website – www.moonpas.org — to organize an ongoing donation drive in support of KWMF’s Education Program. 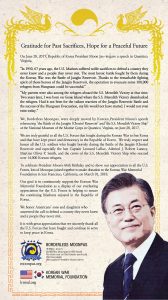 A few weeks ago, Borderless Moonpas members joined together online to make a donation to KWMF. In only ten days, more than 1,400 Moonpas enthusiastically and generously donated. Concurrently, they ran an ad in the Washington Times in honor of President Moon Jae-in, and with gratitude to the sacrifices of all Korean War veterans.

On behalf of all of us at KWMF, and of all Korean War veterans and their families, we would like to express our sincere gratitude to Borderless Moonpas for their generous donation.

You, too, can support KWMF’s Korean War Education Program by making a donation at http://www.kwmf.org/donate/, or by mailing your donation, payable to KWMF, to:

The Korean War Memorial Foundation is a 501(c)(3) non-profit organization, Federal Tax ID #27-2773272. Your donation is tax deductible to the full extent allowed by law. Thank you for your support.