Dr. Donald Barker is a native of Sidney, Nebraska and a retired doctor of podiatric medicine. He resides in Atherton, California, and is an active member and supporter of the Korean War Memorial Foundation. Don served as a U.S. Navy hospital corpsman from 1950 to 1954. He was attached to the 1st Marine Division in Korea, 1951-52, and the 3rd Marine Division in Japan, 1953-54. 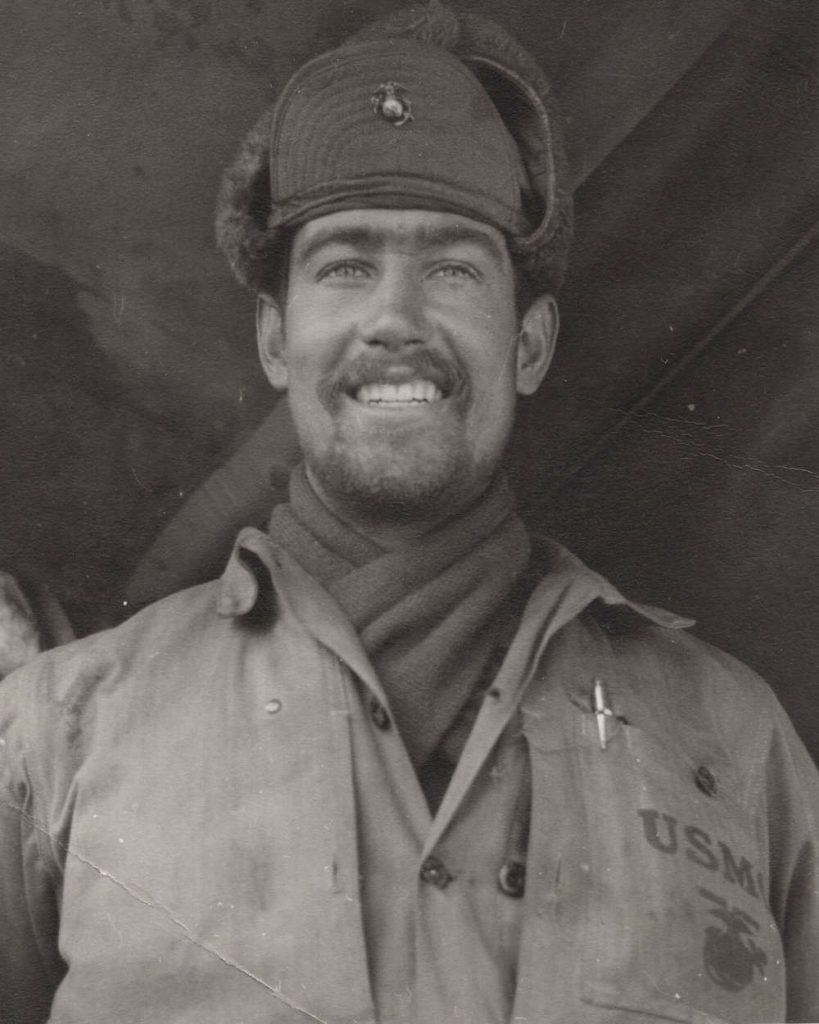 Don Barker when he was a combat corpsman with 2nd Platoon, Item Co, 3rd Bn,1st Marines

Don was a combat corpsman with 2nd Platoon, Item Company, 3rd Battalion, 1st Marines, and participated in the Punchbowl campaign in September, 1951. In March, 1952, he was transferred to Company E, 1st Medical Battalion, a field tent hospital commonly referred to as “Easy Med.” This was the period when the Marines were fighting the hotly contested hill battles in western Korea. Dr. Birney Dibble, commander of Easy Med during the August 15-18, 1952 Bunker Hill battle, described the grim results of the ferocious fighting:

“1,004 wounded men were triaged from Friday night to Monday afternoon, 142 major operations under general anesthesia – belly, chest, and amputations – better than one an hour. We evacuated 153 walking wounded to Able Med for minor debridement, shipped 288 severely wounded men to the hospital ship Consolation in Inchon Harbor – 48 Sikorsky helicopters with six stretchers in each. We lost 21 men during or after surgery. Three men came in DOA. That means we operated on 397 WIAs in the Minor Tent. A high percentage of these minors were multiple shrapnel wounds – 5, 10, 20, even 30 wounds in a single body, but none of them breaking bone or penetrating the belly or thorax. Many would have been called “majors” in a stateside hospital. Donald (Barker) worked in the Minor Tent where all the surgeries were performed under local anesthetic.”

After the ordeal of Korea and a tour stateside, Don served with the 3rd Marine Division in Japan. There he volunteered to work at the USAF Hospital in Nagoya, where they were treating Marine patients. After his discharge from the Navy in 1954, Don continued his medical education, studying pre-med at the University of Wyoming, and then graduating from the California College of Podiatric Medicine in San Francisco. He was a member of the professional staff, with surgical privileges, at Sequoia District Hospital in Redwood City, California, and retired in 1999.

Since then he has volunteered to serve as a chaplain’s assistant and case volunteer with the Injured Marine Semper Fi Fund at the VA hospitals in Palo Alto and Menlo Park, California. Don’s hobbies include fishing and target shooting. He also does an exemplary job singing the beloved Korean folk song “Arirang.” In the original Korean, of course! Dr. Donald Barker, Korean War veteran. 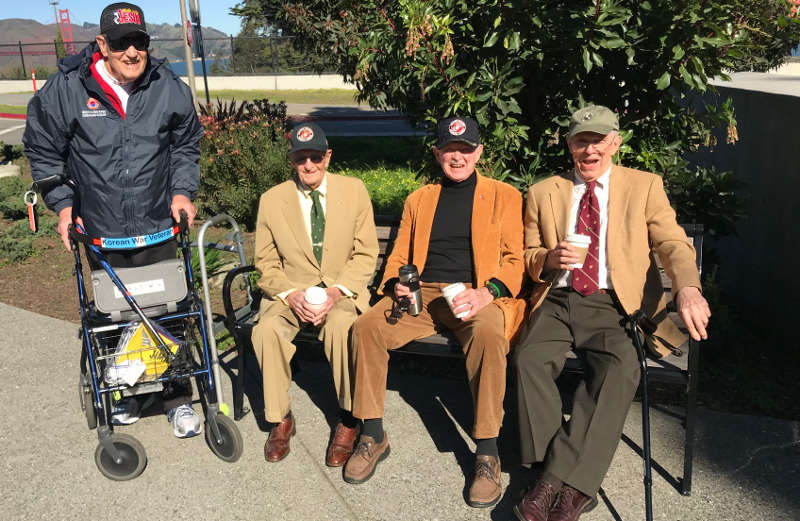 A Happy Band of Brothers: Don Barker (standing, L) with friends and fellow veterans Ed Brandle, Casey McKibben, and Wayne Christenson during a recent visit to the Korean War Memorial