A Memorable Event — and a $1 Million Donation from Korea!

Six years ago, when John Stevens, Don Reid, and several other veterans founded the Korean War Memorial Foundation (KWMF) in San Francisco, the thought of a formal Groundbreaking Ceremony was no more than a dream. And since the Foundation had no staff, little support, and very little initial funding, it was an implausible dream at that. But on Saturday, July 11, 2015, in the Presidio of San Francisco, that dream finally came to life, as 550 Korean War veterans, their families, donors, and other supporters turned out under a brilliant blue sky for this truly impressive and memorable event. 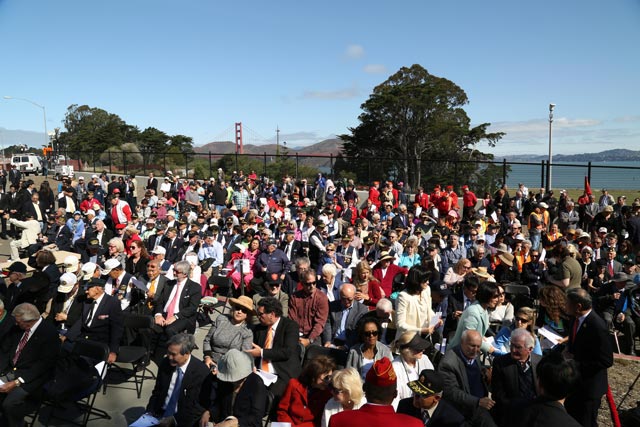 Click here to watch the video of the full ceremony. 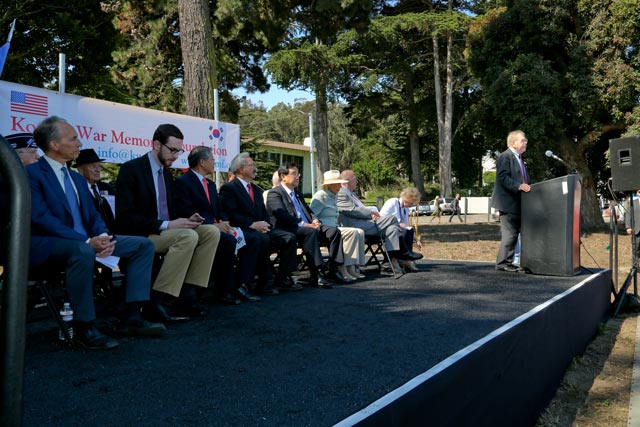 The ceremony began with the Star-Spangled Banner. This was followed by the Korean National Anthem, sung by a group of young Korean students from Kyungbuk College who are currently in the Bay Area on a summer exchange program. 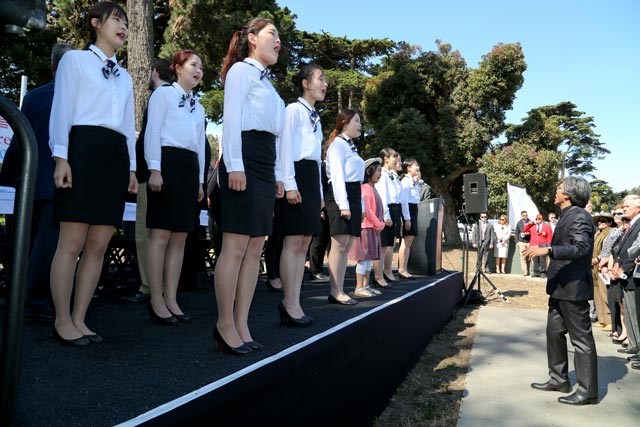 Chaplain Denny Weisgerber then gave the Invocation. He included a moment of silence for those who made the ultimate sacrifice in the Korean War, some of whom are buried in the National Cemetery just across the road from the Memorial site.

Next came a very special guest, former Secretary of State George P. Shultz. Secretary Shultz, a Marine, began by giving a resounding “Semper Fi!” shout-out to all Marines in the audience. He then spoke of the long, close relationship between the United States and the Republic of Korea, and of the many memorable visits he made to Korea during his tenure as Secretary of State.

KWMF Executive Director and Master of Ceremonies Gerard Parker then requested that all Korean War veterans present, and then all donors present, stand and be recognized. The audience gave both groups an enthusiastic round of applause in appreciation. 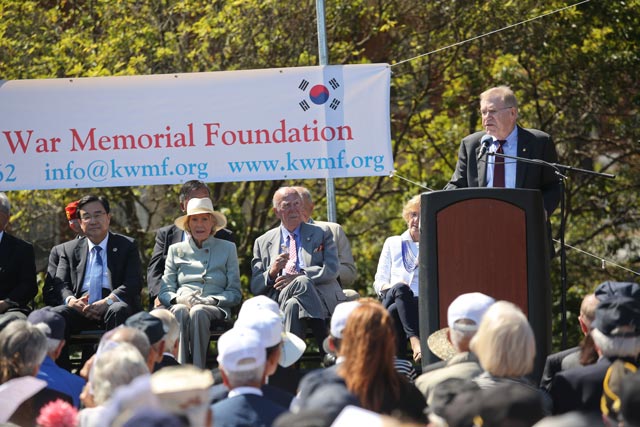 KWMF president and Chairman Judge Quentin L. Kopp (Ret.) was next on the program. He introduced and thanked a number of distinguished guests in the audience, and then spoke of how short the public’s memory can be, specifically about the Korean War. “Our purpose on this historic site,” he said, “is to remind post-1953 generations of that struggle. This memorial constitutes a noble undertaking accomplished by hundreds of Koreans and Americans who insist we remember when freedom was preserved on part of an Asian peninsula, which one day must be wholly free.” 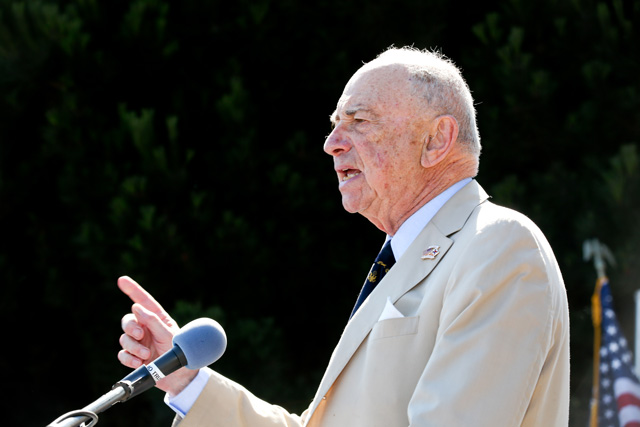 KWMF Treasurer Donald F. Reid, a Marine veteran of the Korean War, then read a statement of support from Senator Dianne Feinstein. “It is fitting indeed that a permanent memorial be located here,” Don read, “since San Francisco was the embarkation point for so many who fought in that war, and the end of the journey for so many who returned through the Golden Gate, both living and dead.” 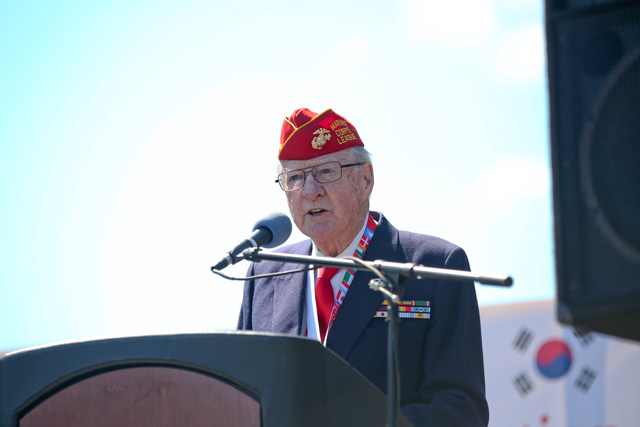 San Francisco Mayor Edwin M. Lee then spoke of “the long-awaited Groundbreaking at this wonderful site,” and added that “We in San Francisco will always remember the Americans who fought in the so-called Forgotten War, with their brothers and sisters from South Korea. All of us have benefitted from their selfless service to protect our freedoms.” 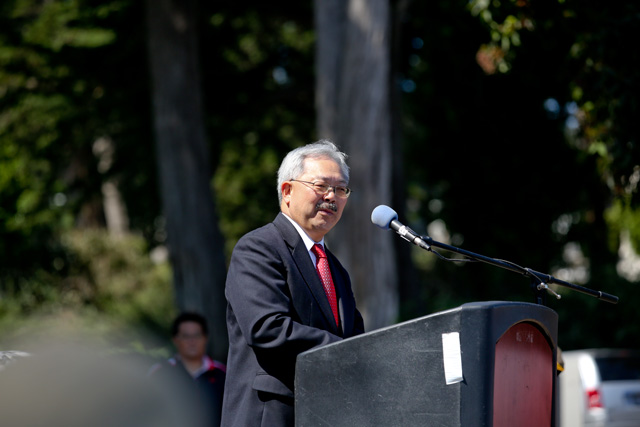 The next speaker was a distinguished Member of the Korean National Assembly, Kim Jung-hoon. In addition to his governmental duties, Representative Kim is Chairman of the American Veterans of Korea Foundation (AVKF), a non-profit organization that supports American veterans of the Korean War as well as their families and descendants with a scholarship program and other activities. On behalf of the Republic of Korea, Representative Kim congratulated and thanked KWMF President Quentin Kopp and former KWMF President Pete McCloskey for “hosting this memorable event.” Then he said, “I would like to convey my deepest gratitude to Korean War veterans and their families who devoted themselves to protect freedom and peace in the Republic of Korea.” 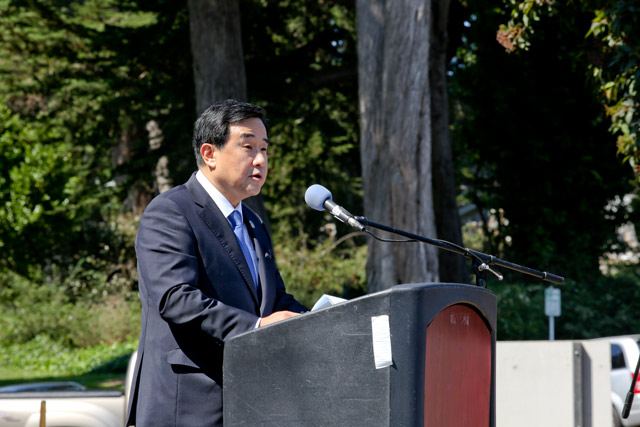 Representative Kim was followed by Nancy Hellman Bechtle, Chair of the Presidio Trust Board of Directors. The Presidio Trust is the Federal agency that so generously provided the priceless real estate upon which the future Korean War Memorial will stand. Chairwoman Bechtle spoke of the Presidio’s long history since its founding in 1776, from the Spaniards to the Mexicans to the Americans. , and emphasized that it is “a place that honors and recognizes its military history.” She continued, “This memorial commemorates the Americans and South Koreans who fought and died in that war.” 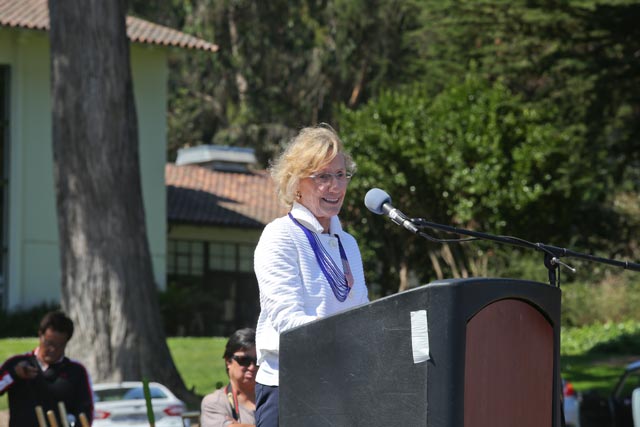 Next on the program was Presidio Trust Chief of Park Development & Operations Michael Boland. He began by thanking all the veterans in the audience, saying, “Today is about honoring your service.” He mentioned the “generations of soldiers who have served here, and kept our nation safe while also supporting our local community.” He stressed that this legacy opf service is still strong in the Presidio to this day. Michael then thanked John Stevens and Don Reid of KWMF for their dedication and years of hard work in helping to achieve this Groundbreaking milestone. 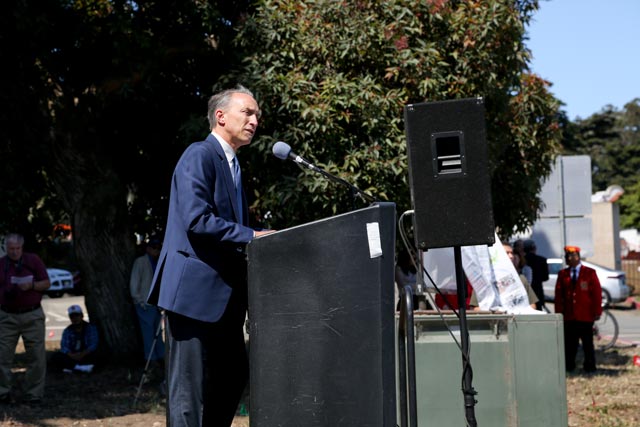 Warren Wiedhahn, Colonel, USMC (Ret.), representing the Korean War Veterans Association, in which he serves as 1st Vice President, then came to the lectern. He pointed at the Golden Gate Bridge, visible just beyond the Memorial site. He reflected on his own experience leaving for and returning from the Korean War under that very bridge, as did so many others. And he remarked how appropriate this location was for a memorial to that long-ago, faraway war. 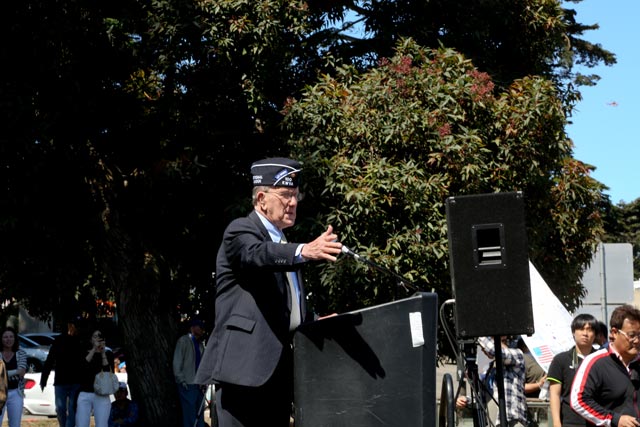 94-year-old KWMF Secretary John R. Stevens, Lieutenant Colonel, USMC (Ret.) spoke next. With eloquence and grace, he thanked all those who had helped bring us to this momentous day, including all donors, particularly the Korean Ministry of Patriots and Veterans Affairs for its $1 million pledge; Michael Boland and his able Presidio Trust staff for their strong support; KWMF Vice President Man J. Kim, whom John described as “the most generous man I know;” Representative Kim Jung-hoon, for his efforts in getting the $1 million pledge approved by the Korean National Assembly; and finally, Korean Consul General Han Dong-man. The Consul General and his staff, John said, had been steadfast and tireless in their efforts to raise funds among the Bay Area Korean community. 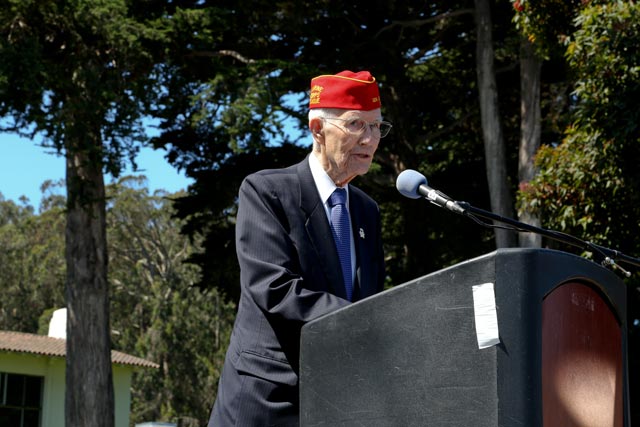 John then introduced, with great pleasure, Consul General Han. When the crowd applauded the Consul General, he stated that the applause was misdirected, and that John Stevens deserved it more, for his leadership. He thanked all the donors, including the Korean community leaders. He then expressed his deep gratitude to the Korean War veterans present, who had sailed away under the Golden Gate Bridge sixty-five years ago “to defend a country you never knew and a people you never met.” 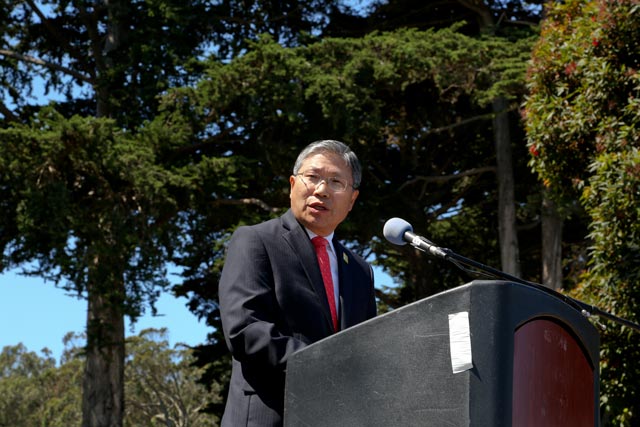 One of the day’s highlights came when Consul General Han asked Judge Kopp to step forward, and then presented him with a check for $1 million. This generous grant from the Korean Ministry of Patriots and Veterans Affairs brings the Foundation’s total funds raised to date to $3.3 million, within striking distance of the ultimate goal of $3.5 million. 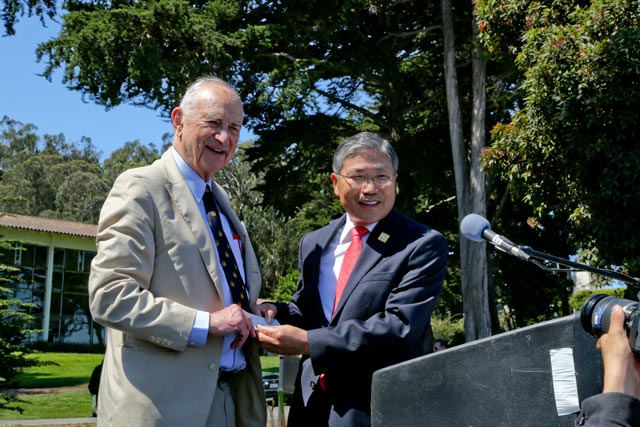 Then the speakers and other distinguished guests moved from the stage to a cluster of gold shovels in a nearby mound of earth for the symbolic Groundbreaking Ceremony. 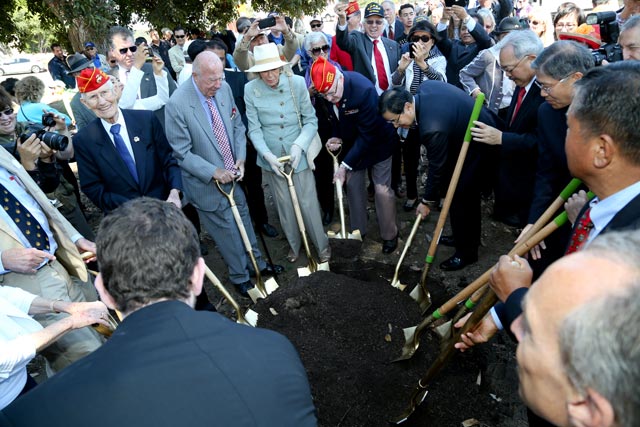 With adequate funding now in place, the Presidio Trust plans to begin major construction in early fall, and the Foundation hopes to have a gala Opening Ceremony of the completed Korean War Memorial in the late spring or early summer of 2016.