What’s Past Is Prologue: The Old Breed and the Future Marines

On January 13, in the War Memorial Veterans Building in San Francisco, four men in their eighties or nineties met to share their experiences with a hundred or so young men and women in their late teens or early twenties. The older men were Korean War veterans. The young people were what are termed “Future Marines,” individuals who have enlisted in the Marine Corps and are now more or less in limbo, awaiting their orders to report to active duty. The meeting was organized by the Korean War Memorial Foundation (KWMF), in cooperation with Major Jonathan T. Frerichs, USMC, Commanding Officer, Recruiting Station, San Francisco, together with his non-commissioned officers representing the various recruiting substations throughout the Bay Area. The purpose of the meeting was to let the Future Marines listen to and interact with the “Old Breed” veterans recounting their experiences in that long ago, faraway war, so that the youngsters might gain some insight into what may lie ahead for them. As Shakespeare noted, what’s past is prologue. 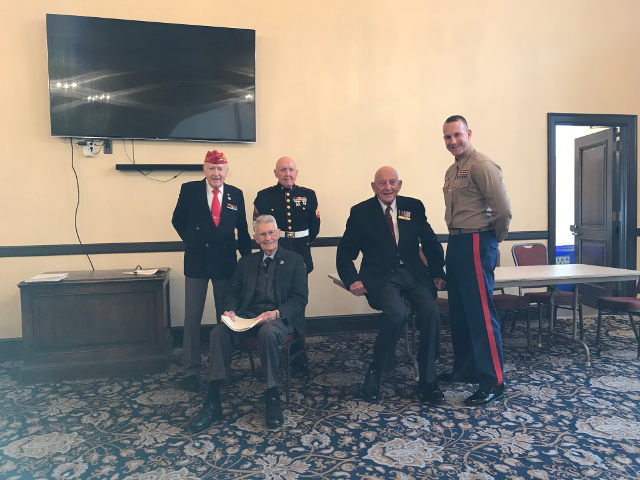 The veterans’ experiences encompassed the whole history of the Korean War, from the early, dark days in the summer of 1950 up to the final battles and the armistice in 1953. 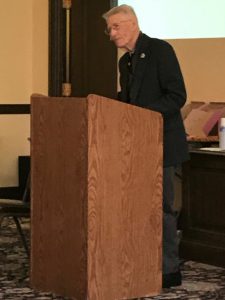 John Stevens spoke first, describing his combat memories as a rifle company commander from the Pusan Perimeter in July and August, 1950 to the Inchon Landing and the Liberation of Seoul in September, and the grim Chosin Reservoir Campaign from October to December. And the Future Marines listened.

Next, Don Reid recounted his memories as a machine gunner in the cold winter of 1951-52, and then his role in the last major offensive of the war in the Punchbowl.

Don was followed by Denny Weisgerber. As a rifle platoon sergeant, he fought in the Bunker War on the Western Front of Korea in 1952, where he was awarded the Navy Cross for valor and the Purple Heart for severe wounds received in a fight at a place known as “The Hook.” 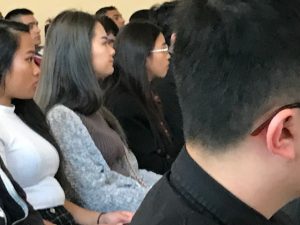 The audience included a significant number of women Marines 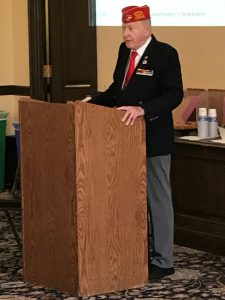 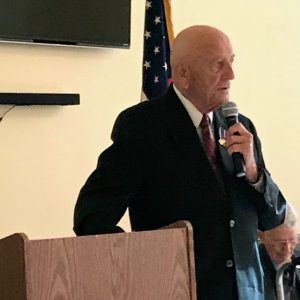 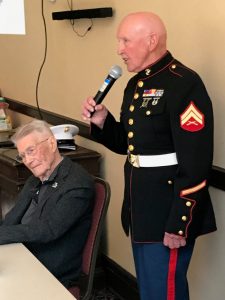 Wally Stewart rounded out the program, wearing his dress blue uniform from 1953, with Purple Heart and other awards. Wally fought and was wounded in the final 1952-53 year of the war, when the casualty figures remained strikingly high.

The presentations were followed by a lively question and answer period, and then standing applause for the speakers by the Future Marines. 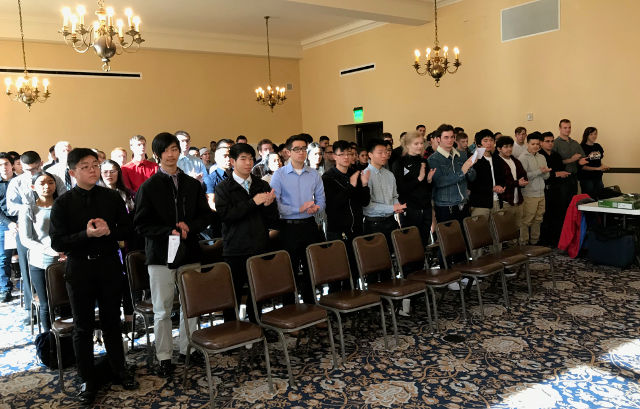 There’s a well-known Marine recruiting poster. It features a photo of a drill instructor snarling at a boot camp recruit with the text, “We Don’t Promise You a Rose Garden!” In a sense, that’s what the day’s program must have felt like to the Future Marines. But in another sense, the program was no doubt an invaluable experience that would help them be better – and better prepared — Marines.