Looking Back: The Past Year

2014 was the most active and productive year for our Foundation since its founding in 2010. When the year began, we had received less than $450,000 in donations, most of it from KWMF’s officers, including more than $260,000 from Treasurer Donald F. Reid and over $110,000 from Vice President Man J. Kim. As of this date, we have raised approximately $2.1 million. Once the pending $1 million grant from the Korean Government is confirmed and received, we will have raised at least $3.1 million. That will leave us still shy of – but within striking distance of – our target of $3.48 million. 2014 has been a very successful fundraising year for KWMF.
If you have been considering making a donation but have been holding back for some reason, now is the time we need you to step forward. If you have already donated, please consider making another donation. Here are some of the highlights of 2014:

March 14: We received a donation by mail from the S.D. Bechtel, Jr. Foundation. The Bechtel people have requested that we keep the amount confidential, but the Bechtel grant remains our largest single donation to date.

April 10: At a ceremony at the Korean Consulate General in San Francisco, Chevron Corporation presented KWMF with a donation of $25,000. The donation check was presented by Chevron Vice President Shariq Yosufzai to KWMF Treasurer and Korean War veteran Donald F. Reid. Consul General Han Dong-man hosted and presided at the ceremony. 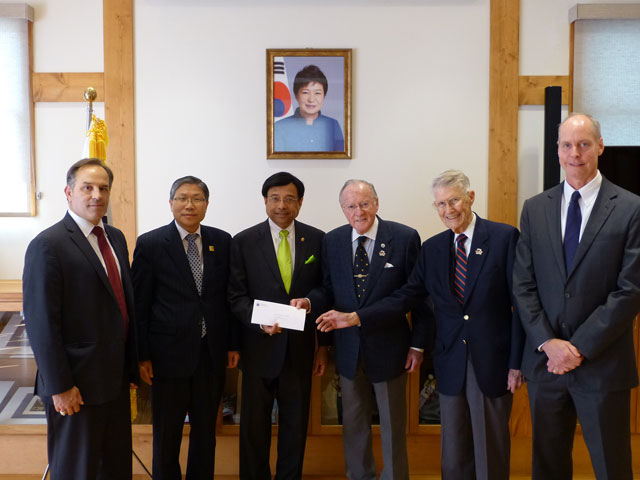 May 18: KWMF’s officers attended a fundraiser organized by Steve and Maria Kahng at their Los Altos Hills home. The event generated about $175,000 in donations for the Memorial, $100,000 of it from the Kahngs themselves. 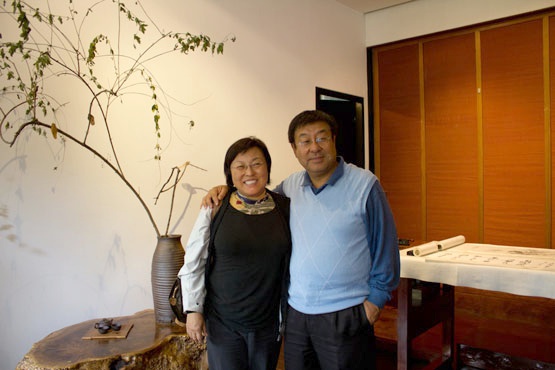 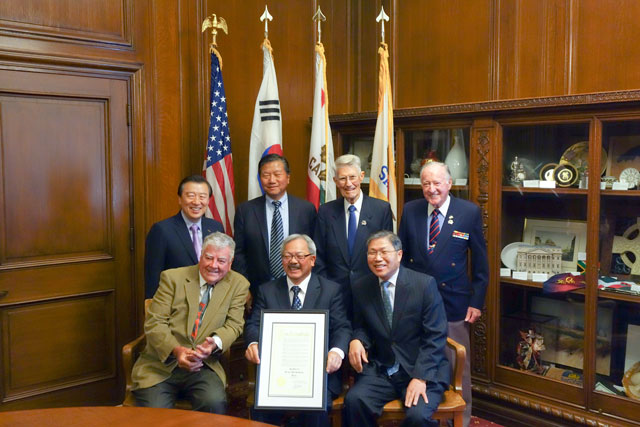 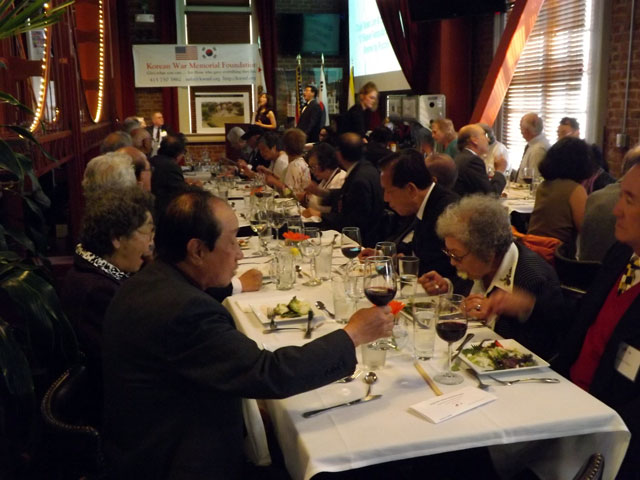 July 25: At a ceremony at the Korean Consulate General in San Francisco, KWMF Treasurer Don Reid received a $250,000 donation confirmation letter from Susan Koret of the Koret Foundation. 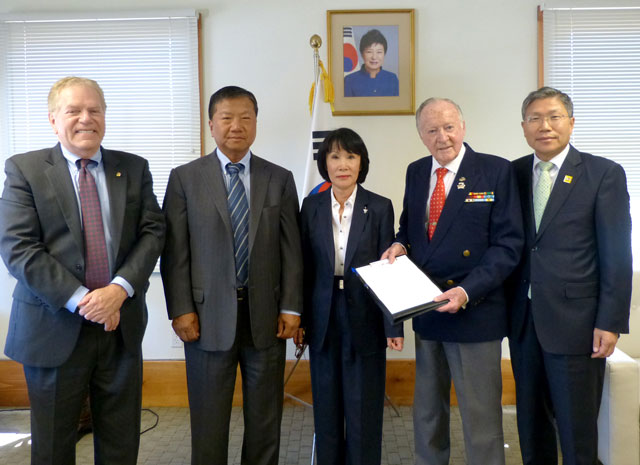 August 13: Director General Lee Kyung Geun of Korea’s Ministry of Patriots and Veterans Affairs (MPVA) in Seoul paid a visit to the Memorial site. MPVA is the ministry that has proposed a $1 million grant to our Memorial. The Director General was very pleased with the location. 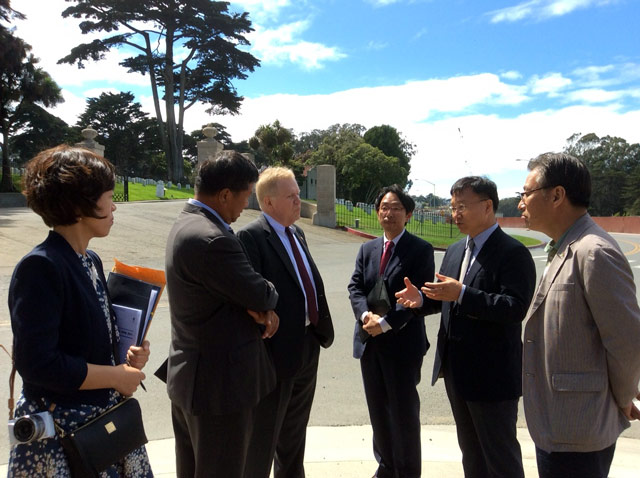 August 26: Four senior cadets from the Korean Military Academy visited the Memorial site, after which KWMF’s officers hosted a lunch for them at the Marines’ Memorial Club. The cadets were eager to meet with Korean War vets. They discussed the war with John Stevens and Don Reid, and presented the veterans with gifts. The cadets expressed their gratitude, and later they also made generous donations. 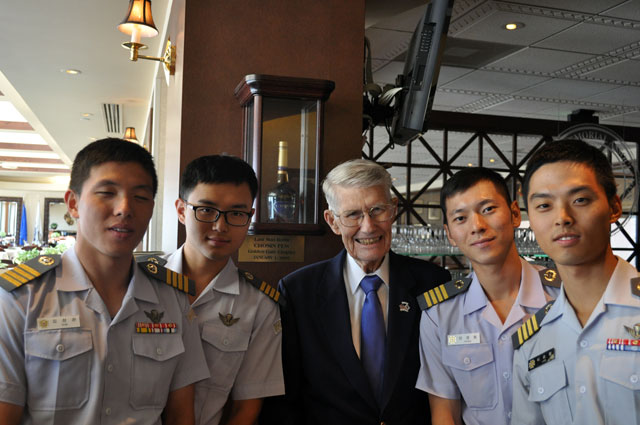 September 14: 81-year-old Marine Korean War veteran Wallace “Wally” Stewart participated in the annual Alcatraz Swim organized by the South End Rowing Club, together with his grandson Tom Farrar and Tom’s friend Nick Abramczyk. He promoted his participation as a fundraiser for the Memorial. This resulted in extensive media coverage not only of Wally, but of our Memorial and its need for funding, and generated several thousand dollars in donations. 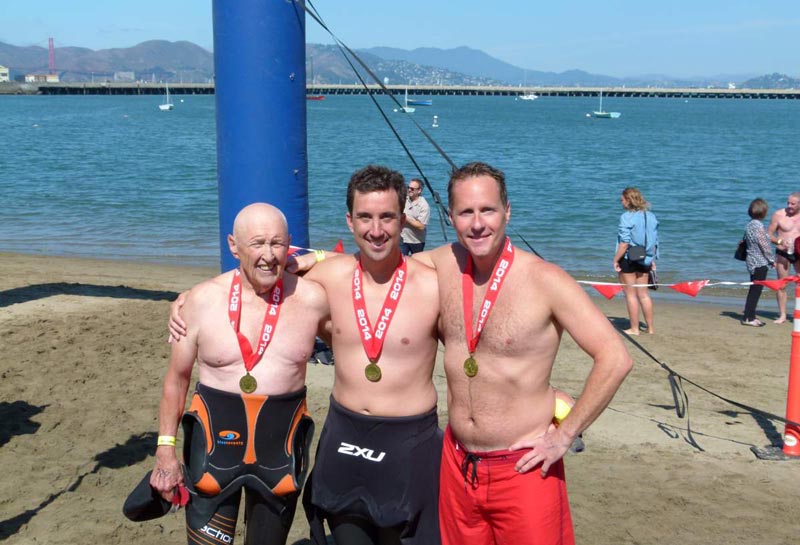 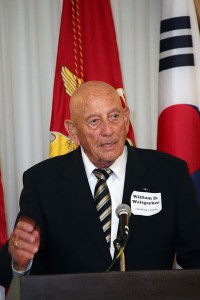 September 18: KWMF held its annual Korean War Veterans Luncheon at the Marines’ Memorial Club, free for all vets and their guests. Gunnery Sergeant Denny Weisgerber, USMC, was the featured speaker and gave an emotional recounting of his combat experience at “The Hook” that resulted in the loss of a leg and a Navy Cross for valor. The event was well-attended and resulted in some donations to the Memorial. 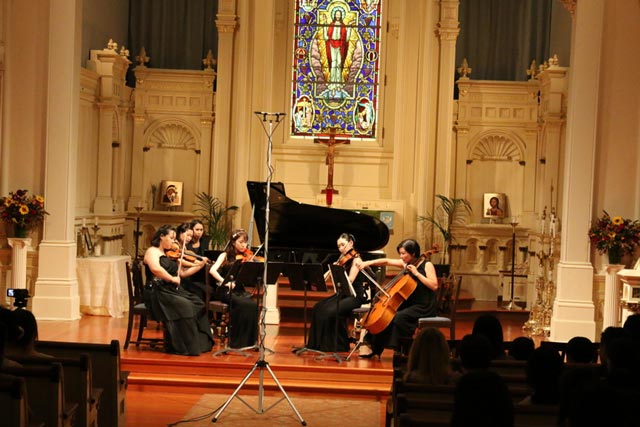 Looking Ahead: The Coming Year

We’ve come a long way, but our task is far from over. Our primary challenges in 2015 will be as follows: