Norma Busse and her twin brother Norman, with whom she was always competitive, graduated from Abraham Lincoln High School in San Francisco in 1944 and went their separate ways. Norman spent a year at Stanford University before getting an appointment to the U.S. Naval Academy. Since Norman had gone to Stanford, Norma went to the University of California, Berkeley. And since Norman was going in the Navy, Norma joined the Army! At first she was a recruit with a $50 a month salary, but later went to Officer Candidate School and was commissioned as a second lieutenant.

Her second duty assignment, in 1952, was to Japan. She and Norman were briefly reunited at that time. He was serving on an aircraft carrier in Japanese/Korean waters; Norma believes it was the U.S.S. Forrestal. Then Norma got what she considered a dream job: Assistant Director of Special Services for Asia. The job entailed coordinating the USO entertainment tours for Japan and Korea. Norma and her team would welcome all the Hollywood celebrities and other entertainers, get them housing, outfit them in Army fatigues, build crates for their costumes and musical instruments, plan their itineraries, arrange for transportation, and more. Norma would often then accompany the USO entertainers on their tours.

For Christmas, 1952, Norma welcomed a contingent of celebrities from Paramount, MGM, and Universal Studios. The Hollywood stars included Paul Douglas and his wife Jan Sterling, Rory Calhoun, Debbie Reynolds (still a teenager), and Carleton Carpenter, Debbie’s co-star (and boyfriend at the time) from their recent movie Abba Dabba Honeymoon. 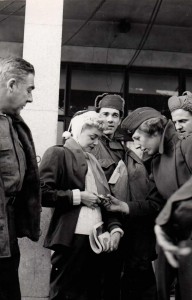 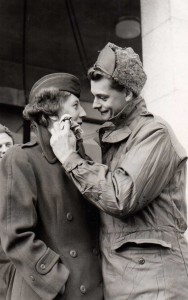 Carleton Carpenter, Debbie Reynolds’ boyfriend at the time, getting a bit flirtatious with Norma

A solo tour followed, featuring singer Lucy Monroe. She was known as “The Star-Spangled Soprano,” because she sang the National Anthem at every New York Yankees home game. With Norma as tour leader, Lucy and her accompanist, Army accordion player Lou Tulianello, entertained at a number of hospitals in Japan and Korea as well as hospital ships offshore. 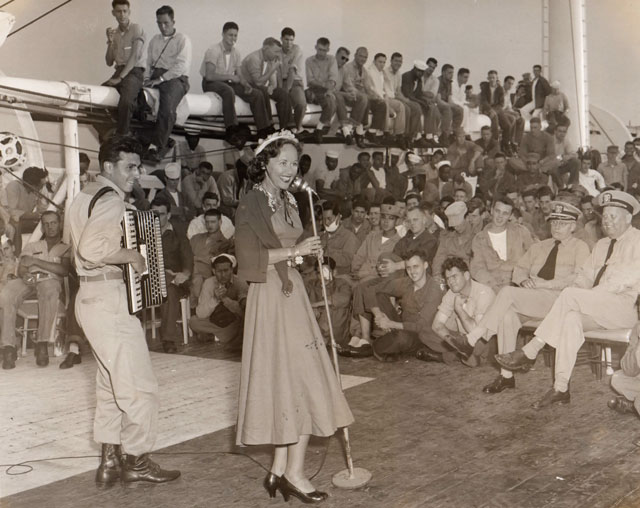 Lucy Monroe, the “Star-Spangled Soprano,” singing for the patients and crew aboard the hospital ship U.S.S. Haven

During this tour Norma, together with Lucy Monroe and her accompanists, had the honor of meeting South Korean President Syngman Rhee and his wife for a “photo op”. 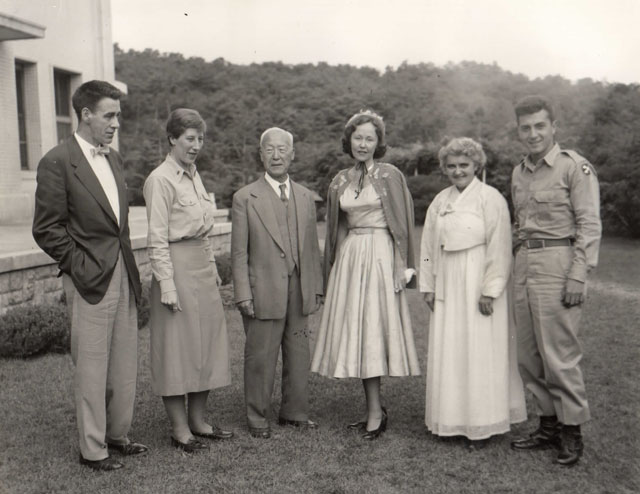 An amusing sidebar: because of Norma’s height (nearly 5’11”), the Koreans nicknamed her “American Woman Skyscraper”!

Among the other celebrities Norma met on USO tours were Cary Grant and his then wife Betsy Drake, Eddie Fisher (then serving in the Army), and Raymond Burr. Cary Grant and Raymond Burr visited dozens of hospitals throughout the Combat Zone. Norma recalls that Mr.Burr gave readings of poetry and scenes from well-known movies that fascinated his audiences, who gave him standing ovations. Summing up her experiences recently, Norma remarked, “This assignment was a dream job for someone on her first overseas tour of duty, and I shall never forget it.”

Norma V. Busse stayed on active duty until 1973. She then went on to law school and a distinguished career as an attorney as well as a judge. She now resides in San Antonio, Texas.