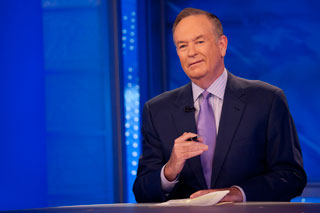 Photo courtesy of The O’Reilly Factor

KWMF got a big boost from Fox News host Bill O’Reilly recently, resulting in an infusion of much-needed funds for the Memorial. At the end of “The O’Reilly Factor” on March 24, Bill began his Tip of the Day by saying, “We don’t hear very much about the Korean War, but 1.8 million American military people fought in it.” He went on to describe our mission, and to spell out our website address twice, while it was displayed in large bold letters on the screen: KWMF.ORG. He finished up by saying, “We hope you support this important endeavor. It would be very generous of you if you did.”

Within minutes, his viewers started making online donations on the KWMF website. By the following morning, people were donating not only online, but by phone and email as well. And the donations have continued to come in ever since, from nearly every state in the Union. Thank you, Bill, for this support. It is appreciated by all Korean War veterans and their families – in fact, by all American veterans and their families. Here’s a link to the video of that Tip of the Day from Bill: http://www.foxnews.com/on-air/oreilly/index.html#/v/4132558636001