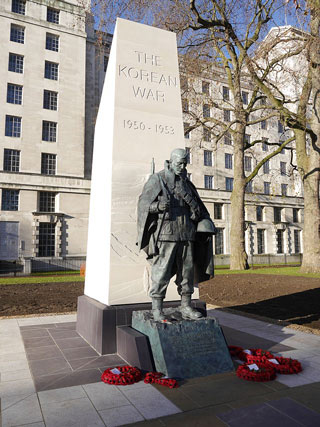 On December 3, 2014, a new Memorial to the UK’s Korean War veterans was commemorated at a ceremony in Central London. Britain’s Korean War Memorial, a gift from the Republic of Korea to honor the British troops who served in the conflict, was unveiled outside the Ministry of Defence building on Victoria Embankment.

Over 500 guests, including 320 Korean War veterans, watched as His Royal Highness the Duke of Gloucester delivered a message from the Queen. Other dignitaries participating included British Defence Secretary the Rt Hon Michael Fallon MP, and the Republic of Korea’s Minister of Foreign Affairs, Mr. Yun Byung-se. 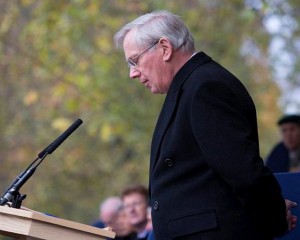 HRH the Duke of Gloucester

The Memorial is a bronze statue by sculptor Philip Jackson, standing in front of an inscribed and carved obelisk of Portland stone on a base of Welsh slate. 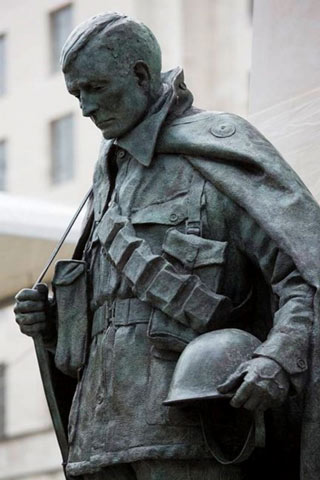 A closer view of the statue

On the north face of the obelisk is the emblem of the United Nations and the following inscription:

The Korean War was the first UN action against aggression. The UN forces that fought the North Korean invasion were drawn from 21 countries. Although exhausted and impoverished after the Second World war, Britain responded immediately by providing strong naval, army and air forces and became the second largest contributor after the United States. A distant obligation honourably discharged.

William Speakman, VC, President of the British Korean War Veterans Association, was a private in the Black Watch Regiment, attached to the King’s Own Scottish Borderers during the Korean War, and received the Victoria Cross for valor.

Mr. Speakman was unable to attend the Memorial unveiling ceremony for health reasons, but sent the following letter to HRH the Duke of Gloucester:

81,084 British servicemen served in the Korean War. 1,106 were killed in action, thousands were wounded, and 1.060 suffered as prisoners of war. For additional information on this striking Memorial, including additional photos, please visit the following links: