A Little-Known but Inspiring Tale of the Korean War

The SS Meredith Victory was a United States Merchant Marine Victory ship, essentially a cargo freighter. It was built during World War II, but its moment of glory came in the Korean War, during the dark days of December, 1950, when it evacuated over 14,000 Korean refugees fleeing the invading Communist Chinese. Under Captain Leonard LaRue, the Meredith Victory performed the largest humanitarian rescue operation by a single ship in history. Designed to carry only 12 passengers and 47 officers and crew, the ship took the 14.000-plus refugees to safety and earned herself the name “The Ship of Miracles.” 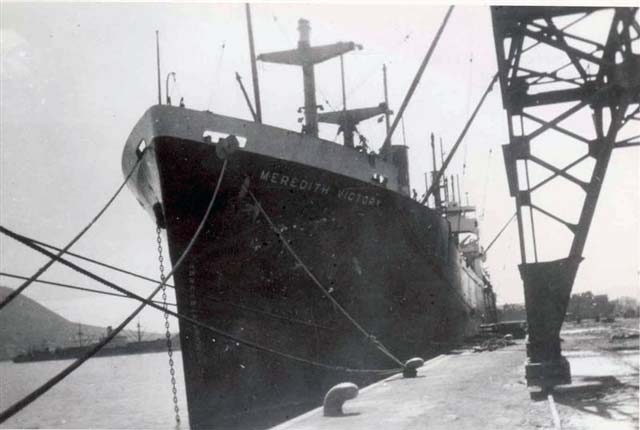 The SS Meredith Victory at the time of the evacuation

The saga began in December, 1950, when U.N. forces were reeling from the sudden onslaught of Communist Chinese troops invading from Manchuria. More than 100,000 outnumbered U.N. troops were withdrawing south to the port city of Hungnam, where they were to be evacuated on 193 ships, a massive effort. Close to a hundred thousand desperate civilian refugees had also gathered at the port, hoping to avoid death or capture at the hands of the Communists.

The Meredith Victory was one of the ships waiting in Hungnam. On December 21, Captain LaRue decided to offload nearly all his cargo so that he could evacuate as many of the terrified refugees as possible. All through the night of December 22-23, using booms and makeshift elevators, Captain LaRue’s crew filled the five cargo holds and the entire main deck with more than 14,000 civilians seeking salvation. The Meredith Victory then departed on the morning of the 23rd for Pusan, 450 sea miles to the south, without any military escort or means of self-defense. Numerous other ships evacuated the rest of the refugees, but no ship carried anywhere near as many in one voyage as the Meredith Victory. 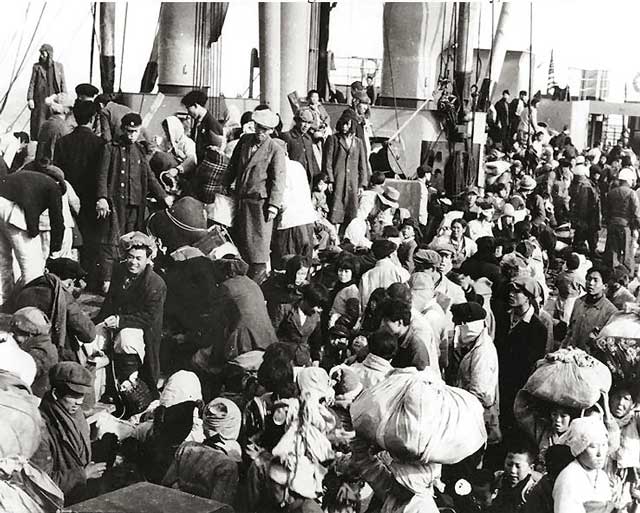 Korean refugees on the main deck

Conditions were so crowded that most of the refugees were forced to stand, in freezing conditions and with little food or water, for the three-day voyage. Yet there were no fatalities or injuries. In fact, the number of passengers actually increased en route: five babies were born on the main deck! All were delivered with the help of First Mate D.S. Savastio, with nothing more than basic first aid training. And compassion. 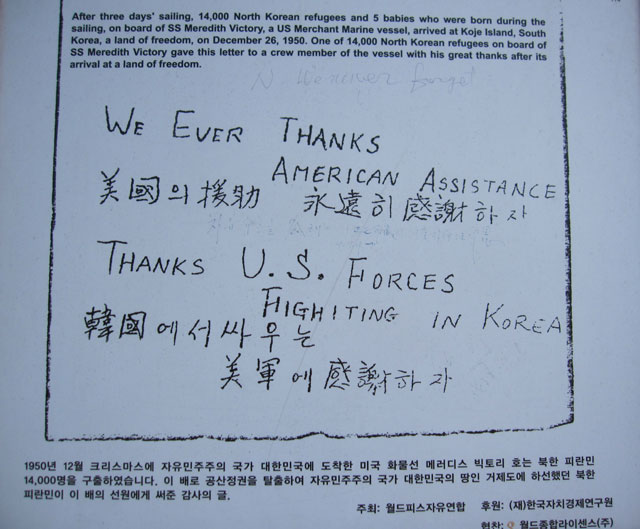 A note given to a crew member by a grateful refugee

The South Korean Government later awarded the crew the Korean Presidential Unit Citation. And the United States Merchant Marine presented the crew with the Meritorious Service Medal, the Merchant Marine’s highest honor. Captain LaRue remained in command of the Meredith Victory until she was decommissioned in 1952. The ship then sat in the harbor at Bremerton, Washington as part of the “mothball fleet.”

In 1960, the SS Meredith Victory was conferred the title of “Gallant Ship” by a special Act of Congress signed by President Dwight D. Eisenhower. The U.S. Department of Transportation declared her miraculous voyage as “the greatest rescue in the history of mankind.” The Guinness Book of World Records describes it as “the largest evacuation from land by a single ship.” 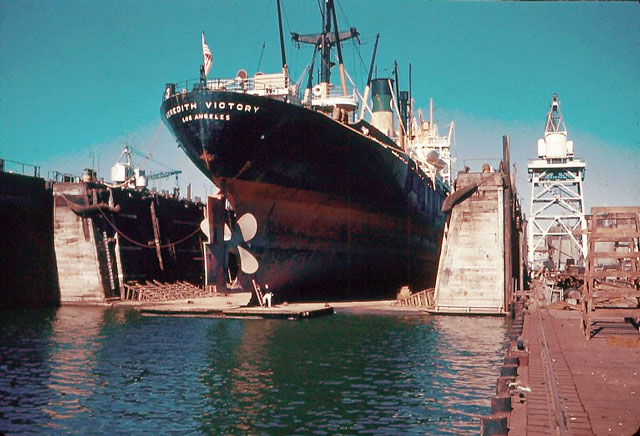 The SS Meredith Victory toward the end of her proud service

Following the war, Captain LaRue became a Benedictine monk at St. Paul’s Abbey in New Jersey. He took the name “Brother Marinus.” Marinus is Latin for “of the sea,” a fitting name for a seafaring man.

The SS Meredith Victory served in a couple of minor missions during the Vietnam War, but ultimately was sold as scrap metal to – ironically – China. And today, the story of this proud “Ship of Miracles” has been largely forgotten, just another incident in the so-called “Forgotten War.”

Anyone interested in learning more about this remarkable story is encouraged to read the book “Ship of Miracles” by Bill Gilbert, available on Amazon and elsewhere. And a new documentary film by R.J. McHatton, also titled “Ship of Miracles,” has recently been released on DVD. Details are available at http://www.shipofmiracles.com